In addition to flights to Japan, South Korea, the Ministry of Transport plans to open four routes to Taiwan, China, Cambodia and Laos.

On September 3, Mr. Dinh Viet Thang, Director of Civil Aviation of Vietnam, said that today the Ministry of Transport and related ministries will submit to the National Steering Committee for Covid-19 epidemic prevention to consider opening the international commercial flights from September 15.

Earlier this week, ministries and agencies had a meeting to discuss the plan to welcome inbound passengers after opening international flights.

Accordingly, the 6 regular international routes proposed by the Civil Aviation Authority of Vietnam to reopen from September 15 are between Vietnam and Taiwan, Guangzhou (China), Japan, Korea, Cambodia, and Laos. Estimated number of inbound passengers needing isolation per week is nearly 5,000 in Hanoi and Ho Chi Minh City.

The Ho Chi Minh City – Guangzhou (China) route is proposed with a frequency of 2 round-trip flights per week. In particular, the Vietnamese side appoints Vietnam Airlines / Pacific Airlines to operate one flight, and the Chinese side makes one trip. Estimated number of isolated visitors in Ho Chi Minh City is up to 540 guests per week.

Vietnam Airlines plans to operate routes Hanoi – Tokyo and Vietjet Air will operate routes from Ho Chi Minh City – Tokyo. The maximum number of quarantines in Hanoi and HCMC is approximately 560 per week. 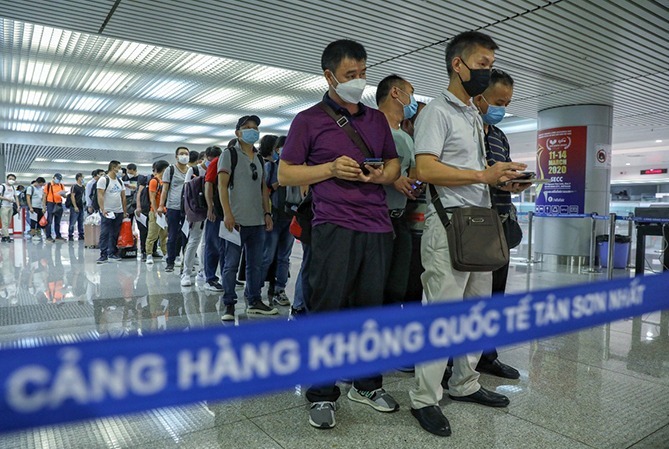 With South Korea, Vietnam Airlines plans to operate route Hanoi – Seoul with a frequency of one flight per week; Vietjet operates the Ho Chi Minh City-Seoul route. The number of quarantined visitors in Hanoi and HCMC is 650 per week.

The route to Taipei – Taiwan will be operated by Vietnam Airlines in Ho Chi Minh City and Vietjet in early Hanoi. Estimated number of quarantined visitors per week in Hanoi is 620 and in HCMC is 700.

Routes to Laos and Cambodia are also proposed by the Aviation Administration to resume with a frequency of one flight per week, operated by Vietnam Airlines.

According to the proposal of the Aviation Administration, passengers arriving in Vietnam must have been in the partner country / region for at least 30 consecutive days before making a flight, and transit passengers are not accepted. Additionally, guests must have a nCoV negative certificate issued within 3 days of the intended date of flight.

Upon arrival at Vietnam’s airports, passengers are quickly tested; testing costs are covered by the airline. Incoming passengers must stay at locations determined by the People’s Committee of the province or city for a fee.

The Civil Aviation Authority of Vietnam petitioned the Ministry of Health to announce medical quarantine requirements for passengers upon entry; publish a list of real-time PCR laboratories in the country to inform partners, passengers by passengers when exiting from Vietnam need a Covid-19 confirmation.

Currently, countries have applied medical quarantine policies for passengers entering. For example, a passenger traveling to China must have a negative confirmation for nCoV at the government-appointed facility from which the first departure passenger is tested within 5 days before departure. In addition, passengers entering China must install a mobile application for surveillance, and centralized isolation for 14 days for a fee.

Visitors entering Korea must self-segregate at their home or designated facilities and have to install a mobile application for surveillance.

From April 1, Vietnam stopped all commercial routes with other countries. Recently, a number of foreign airlines have been re-exploited international routes to Vietnam, but only transporting goods in and out of Vietnam. The flights carrying passengers into Vietnam are implemented according to the plans of the Ministry of Foreign Affairs, passengers are citizens with difficult circumstances, experts, high-tech workers and are isolated from epidemics.

Vietnam had a case of nCoV infection since the beginning of the epidemic of 1,046. Total number of people recovered 746. The number of deaths from Covid-19 is 34. Up to now, a total of 691 cases of domestic infection have been recorded, of which the number of cases related to Da Nang since July 25 to now is 551.